The European honey bee (Apis mellifera) was originally brought to the Americas by colonists from Europe.

These are the bees that beekeepers commonly use for honey production and pollination of our crops. Several subspecies of this honey bee now exist throughout the United States. 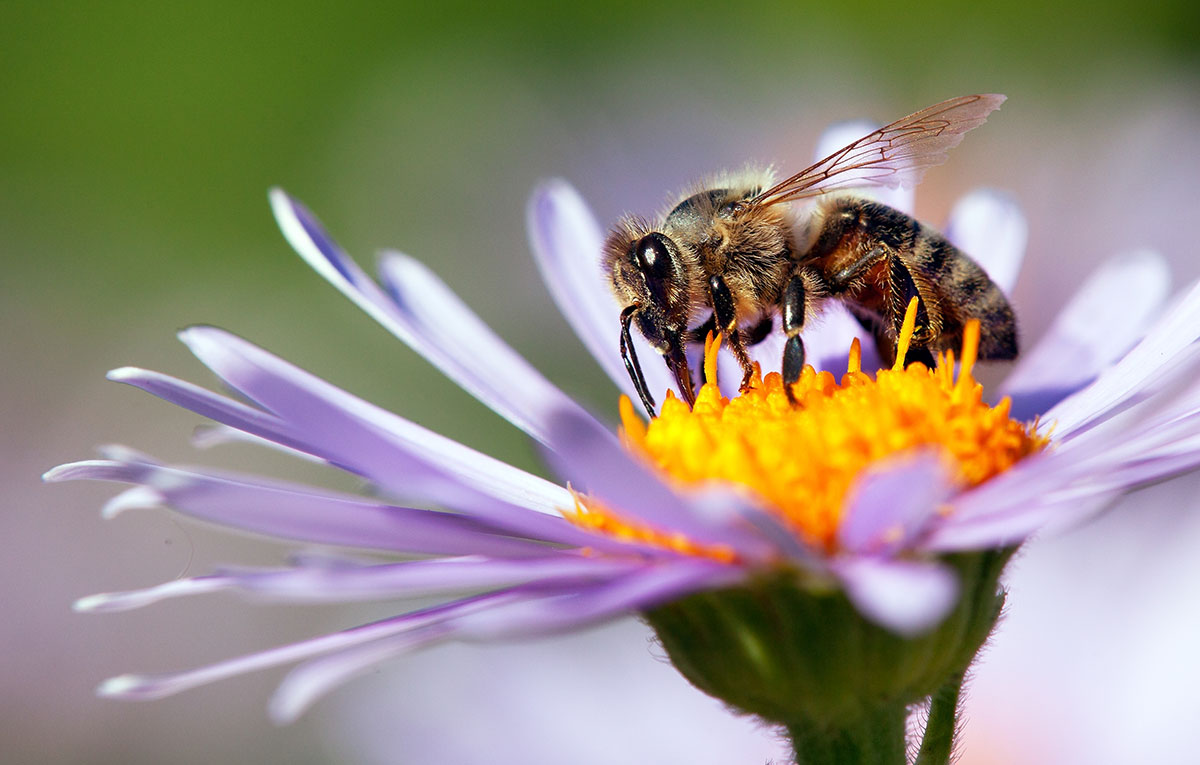 Known as the more aggressive relative of the European honey bee (EHB), the Africanized honey bee (AHB) is a more recent addition to our state and has taken an interesting path to become established in Southern California.

When EHB’s were brought here by colonists, they survived quite well in North America and were good honey producers. However, they did not fare as well in the tropical climate of South America. This habitat was very different than Europe, where EHB’s evolved.

Unfortunately, they were unable to produce a mix that was easy for beekeepers to work with and still do well in the tropics. All the hybrid bees retained the African bee’s aggressive behavior. This mix between the African honey bee and the EHB was labeled the “Africanized honey bee”.

In 1957, these AHBs escaped from an apiary near Rio Claro, Sao Paulo, Brazil, and have spread northward ever since. Not only does this hybrid bee spread through swarming, it also interbreeds with EHBs in new areas. The offspring of these bees are also considered “Africanized” and the less aggressive EHBs gradually disappear. 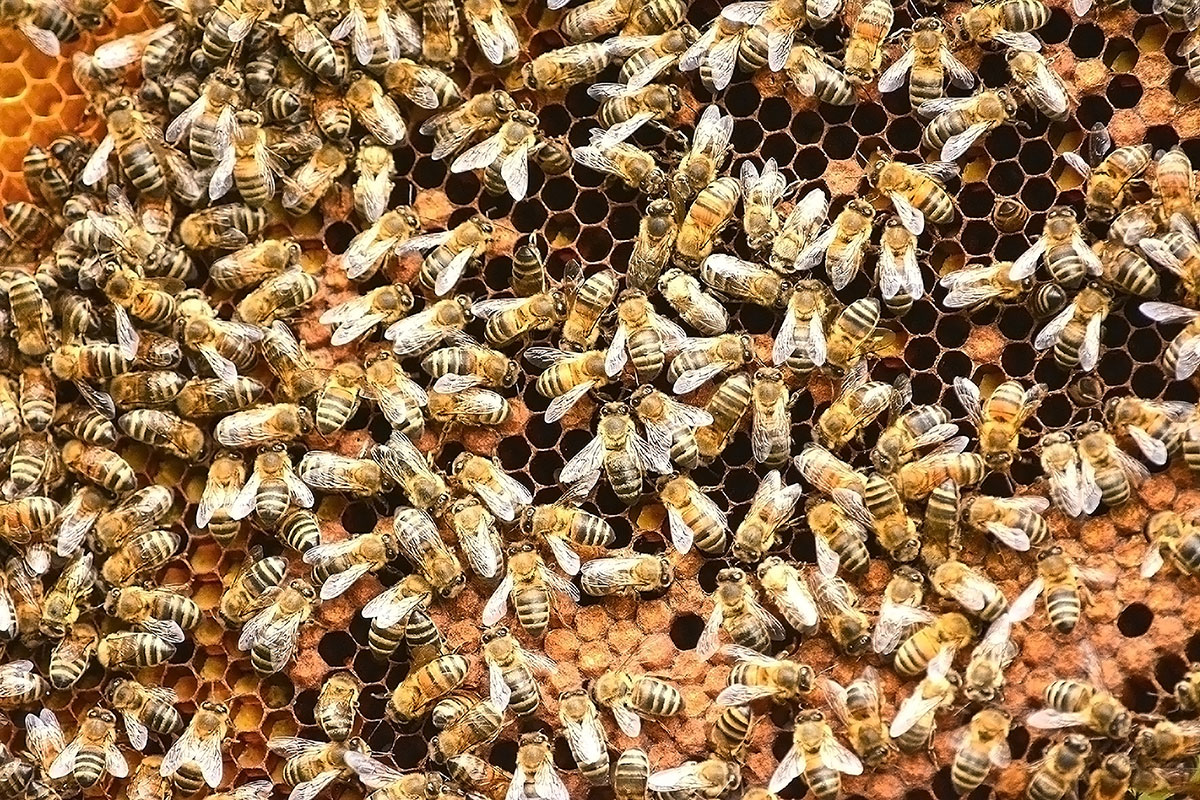 Where Are Africanized Honey Bees Now?

After being released in Brazil, AHBs then spread through Central America and up into North America. They were first reported in Mexico in 1985. Only five years later, the first AHBs were found in the U.S.A., at the Texas border town of Hidalgo in October of 1990.

The first California record was in Blythe in 1994. Los Angeles didn’t have to wait long, with its first AHB colony discovered in Lawndale in 1998.

Today, most counties in Southern California are considered colonized by Africanized honey bees. 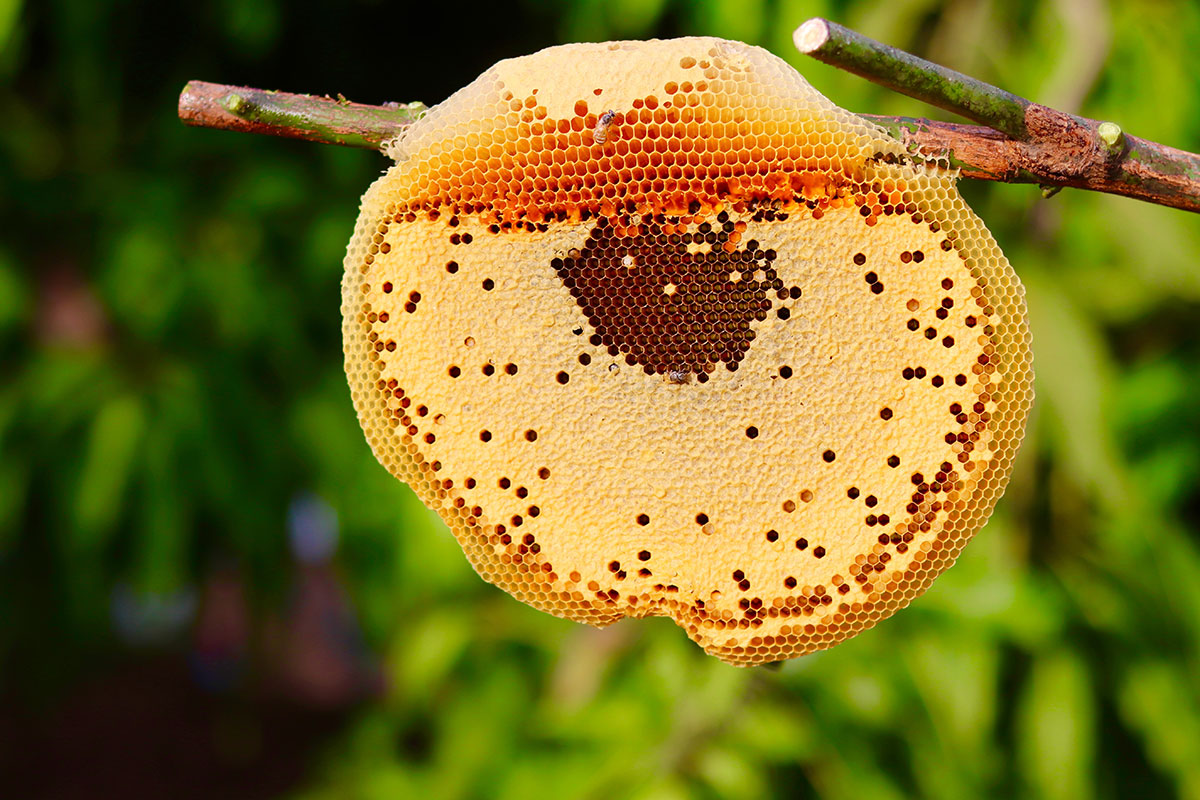 Both AHBs and EHBs have the same basic biology and behavior. They go through four life stages as they develop just like many other insects: egg, larva, pupa, and adult.

Honey bees live in colonies of 10,000 to 50,000 individuals, consisting of a queen, sterile female workers, male drones, and developing bees. Each colony builds a hive consisting of sheets of wax called comb. The wax is secreted in flakes from the worker bees abdomen. The comb is made up of thousands of individual six-sided cells. The cells are used to store honey and pollen for food, as well as to raise the developing bees.

Swarming bees engorge themselves with honey before leaving the hive and are unlikely to sting. When they find a suitable nesting site, the swarm will gather and began to construct its hive. Once the bees establish their hive, they become more defensive.

Disturbing a bee hive can be a real danger. 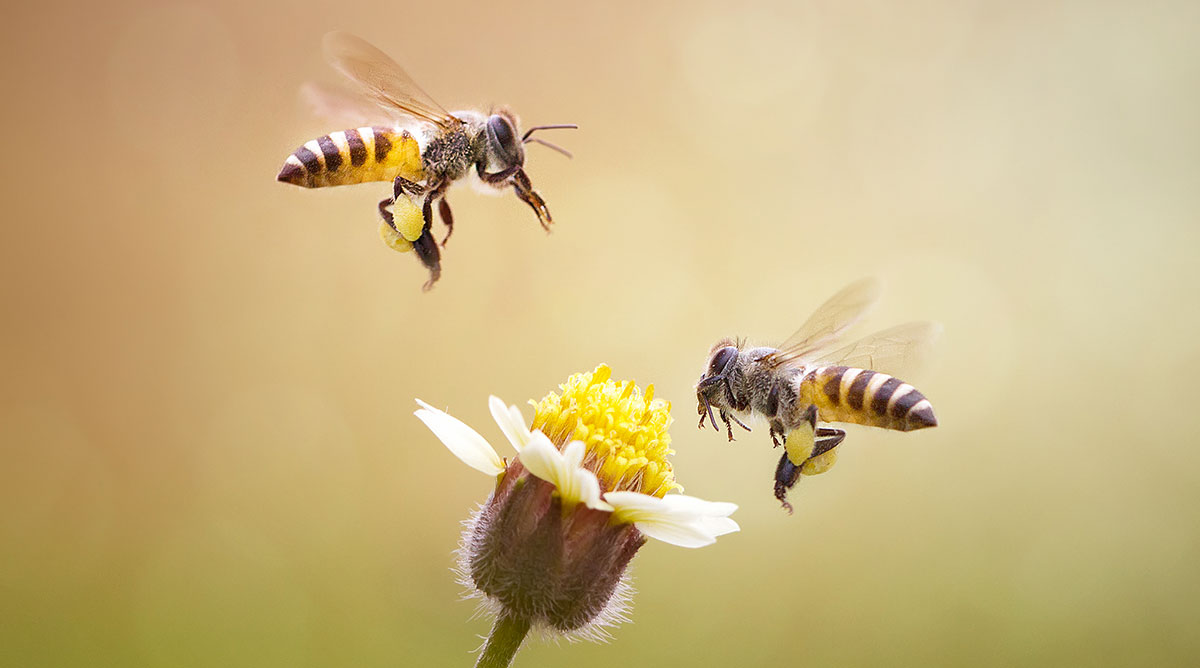 The worker bees are the only bees in the hive that leave to forage for food. All of the workers are sterile females with the capability to sting. A worker bee can only sting once, than it dies. These are the bees you see going from flower to flower collecting nectar and pollen. The workers generally live for about six weeks. 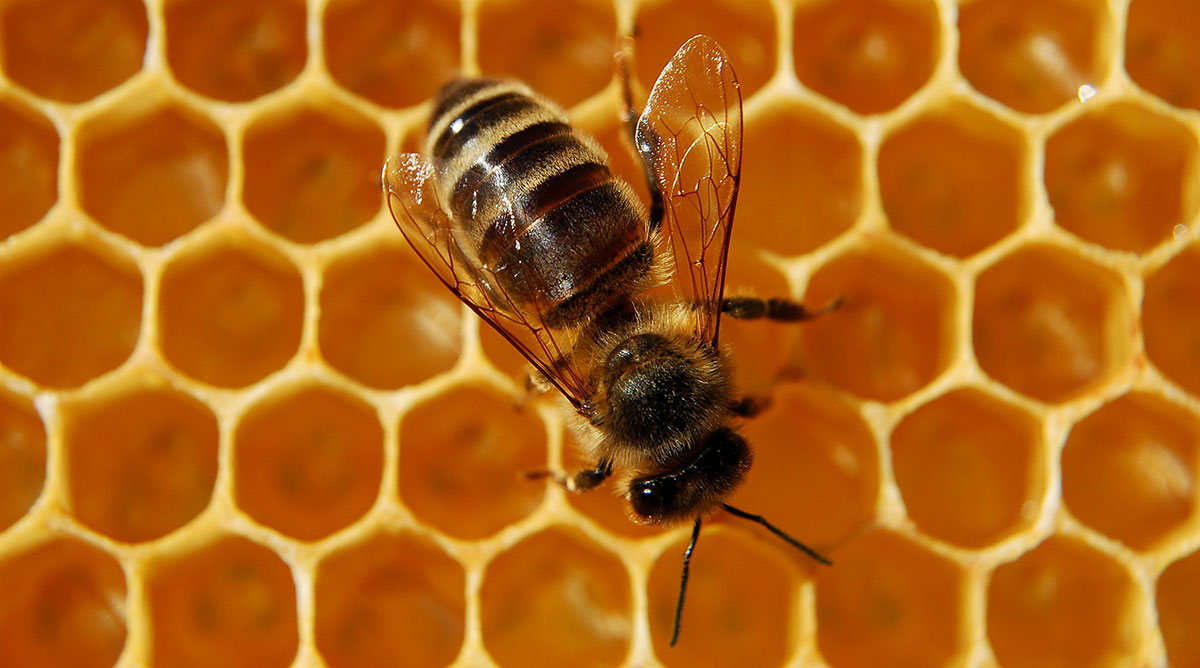 Drones are the only male bees in the hive. They do not have stingers and are larger than the workers. They are cared for by the workers and don’t leave the hive to look for food. Drones live for approximately eight weeks. Their sole purpose is to mate with new queens. They usually leave the colony (or are removed by the workers) in the fall and die. 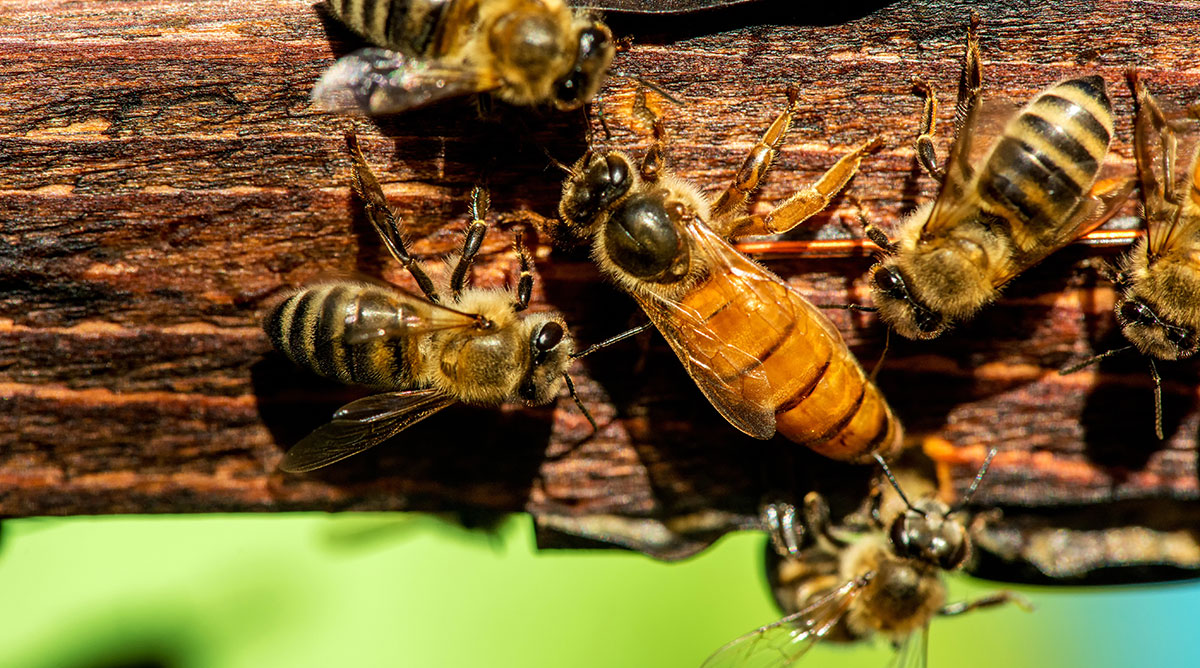 The queen’s main function is to lay eggs. In the right conditions a queen can lay more than a thousand eggs a day. She may also live up to four years. The queen looks similar to the worker bees but is larger in size with a longer abdomen. 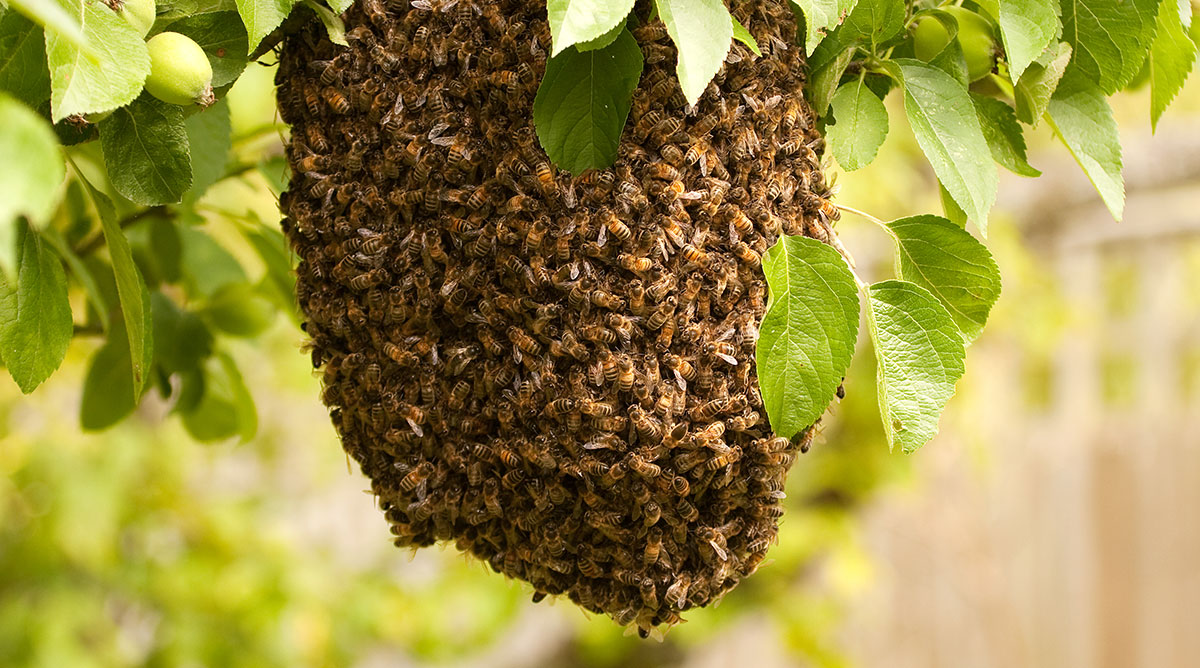 A colony increases in size during the growing season and splits into two or more colonies. A queen and a group of workers leave the nest all at once, often landing on a nearby tree while scout bees seek a new nesting site. This process is called “swarming”. Swarms are most common in spring and summer, but may occur at other times, particularly with AHBs. A new queen will hatch at the original colony, then mate and begin laying eggs.

Though they look identical and share some common behavior, there are some notable differences between AHBs and EHBs:

Africanized honeybees respond more quickly when disturbed than do EHBs. They send out three to four times as many workers in response to a threat. They will also pursue an intruder for a greater distance from the hive. An important thing to remember is that the behavior of even a single AHB or EHB colony can vary greatly on any given day.

Inappropriately labeled “killer bees”, the sting of the AHB is no more venomous than that of the EHB. Each bee delivers only one sting. AHB are more aggressive and more bees deliver stings than EHB, resulting in more venom. Although people have died as a result of 100–300 stings, it has been estimated that the average lethal dose for an adult is 500–1,100 bee stings.

The Technical Working Group of the USDA is recommending that beekeepers not attempt to manage Africanized colonies. They should requeen, move, or destroy such colonies. Even a few colonies of defensive bees in an apiary (commercial bee hive) may cause problems. Weather, season, and food availability can affect the demeanor of any honey bee colony. Consequently, predicting times when a colony may become defensive is difficult. Unprepared beekeepers are at risk of being seriously stung. 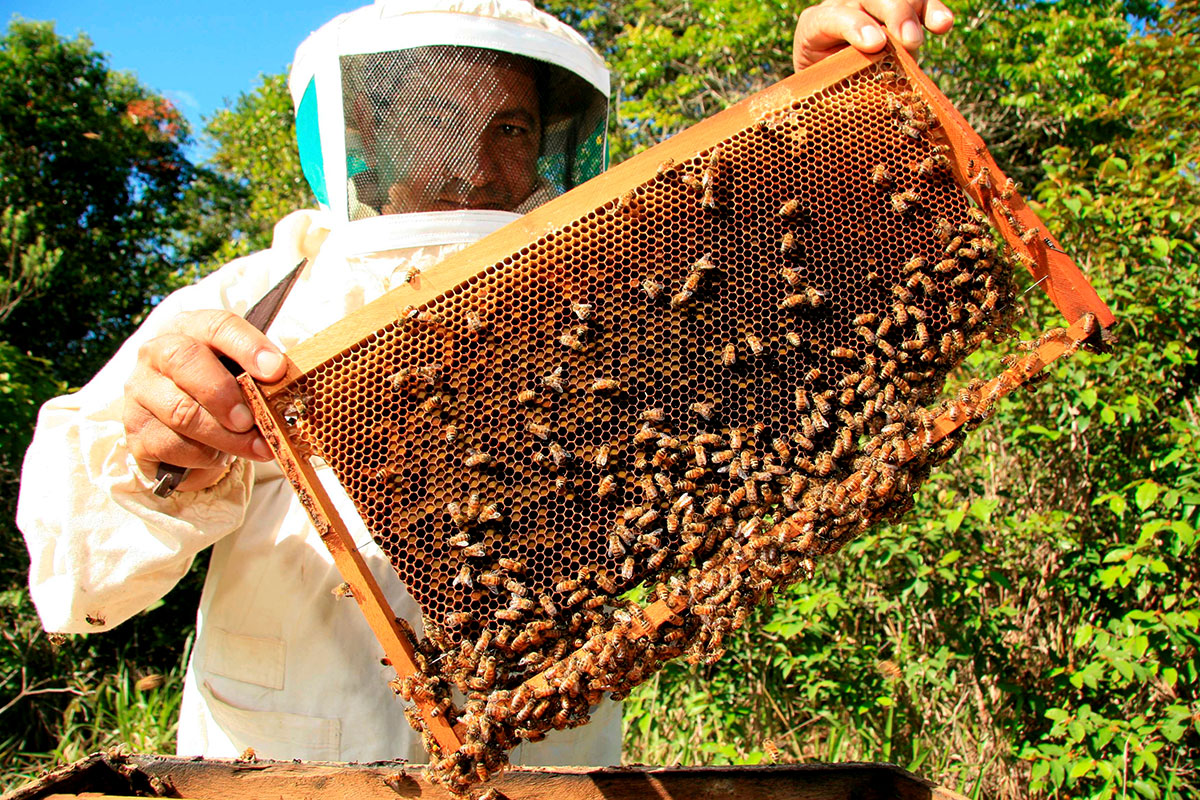 Africanized honey bees are more aggressive when their hive is disturbed.

It is recommended that beekeepers not attempt to manage Africanized colonies. Unprepared beekeepers are at risk of being seriously stung.

How can the District tell the difference?

The differences in body size are used for the official identification of the Africanized honey bees. The Africanized variety is slightly smaller than the European. The District uses the FABIS (Fast Africanized Bee Identification System) test to determine the probability that a colony is Africanized.

A sample of bees is collected from a hive and forewing length is measured under high magnification. The average wing lengths are then looked at to determine the probability of the sample being Africanized. Today approximately 80% of samples collected by the District and tested through FABIS are found to be Africanized. 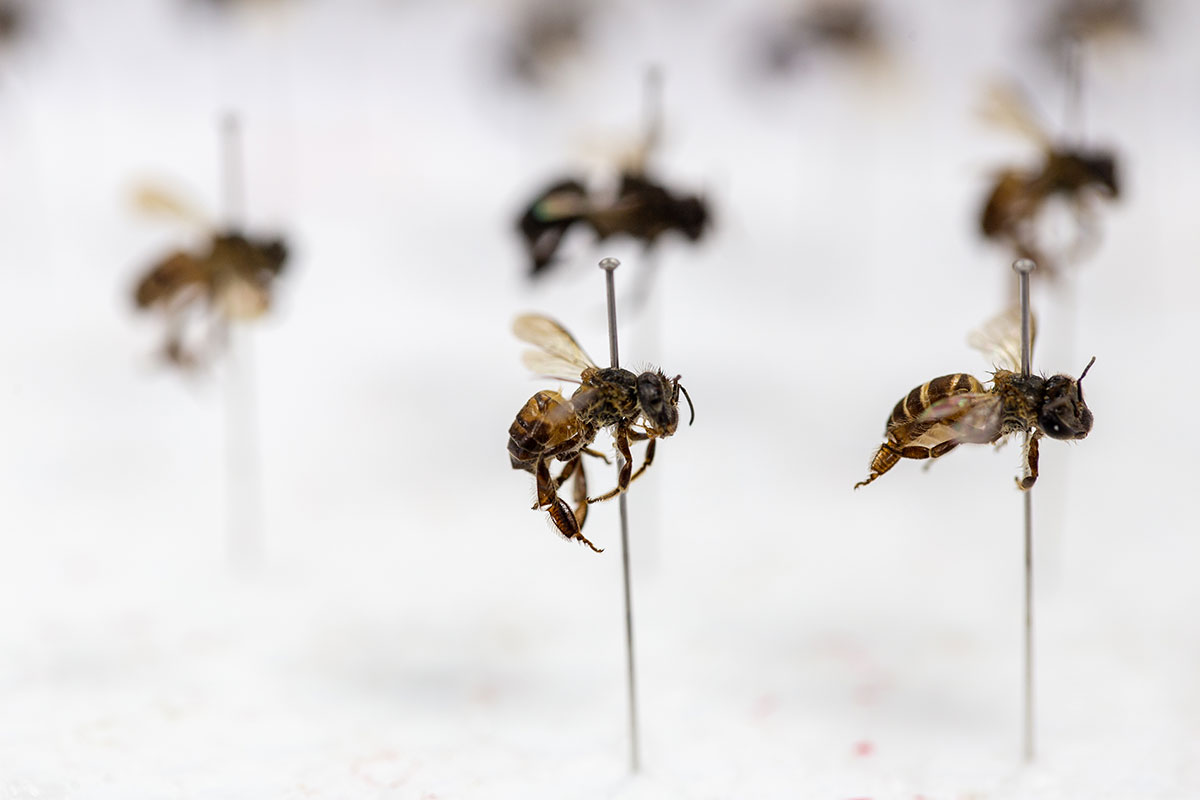 Approximately 80% of samples collected by the District and tested through FABIS are found to be Africanized.